What comes to your mind when you think of a city that never sleeps? The raw image that would appear in your mind is a skyline of tall buildings. This is what we imagine when we think of New York City. You are likely to find them all over the city, but Manhattan has constructed some of the tallest building in new york lately. Most of those skyscrapers are used for commercial, business, or residential purposes.

Here is a List of the Top 15 Tallest Building In NYC:

If you are looking for ‘what’s the tallest building in new york,’ know that it is One World Trade Center. It is the tallest skyscraper in the western world and the seventh-tallest in the world. It is located in the Financial District. A 104-story building which is symbolic of the year the U.S. Declaration of Independence. 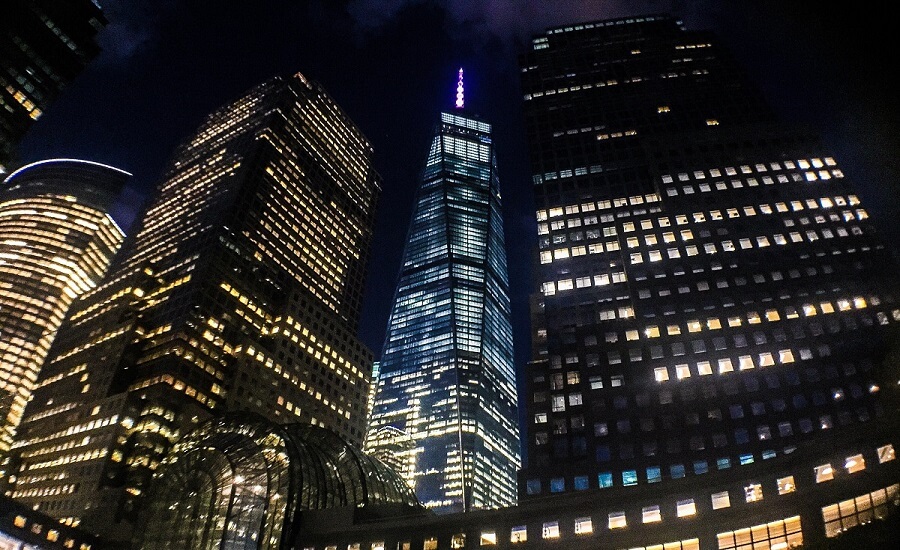 It is a post 9/11 construction as the foundation stone was laid on 27 April 2005. The building is designed by David Childs, who has designed Burj Khalifa in Dubai.

The amazing thing is that you can climb up to its famous observation deck to amuse yourself with the beautiful panorama of NYC. 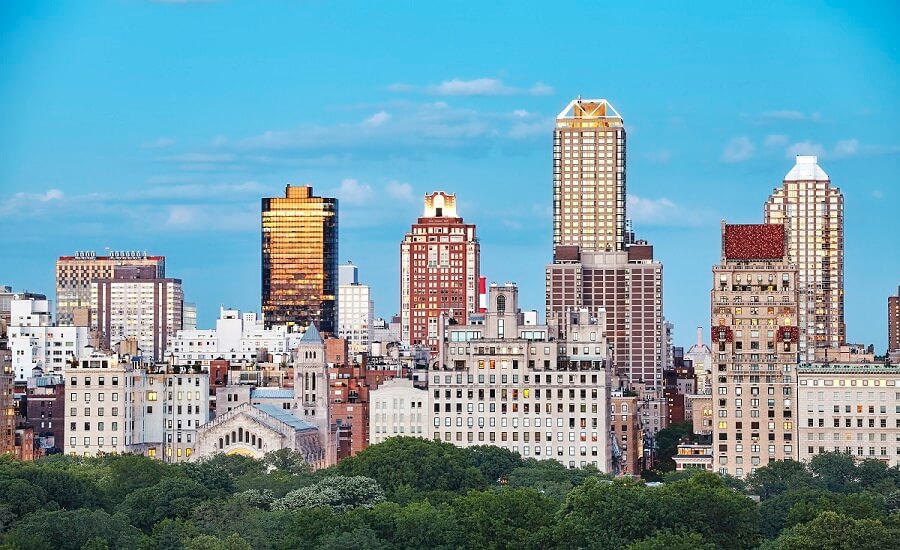 Famous architects design the building, and leading engineers collaborated in the construction. Latest technology and technique are being used to make it strong as well as a luxurious skyscraper in NYC. Condos are costly in this yet-to-complete building.

111 West 57th Street is also known as Steinway Tower after the original building that stood at this spot. The building is not complete yet but still registered itself among the top 10 list of skyscrapers.  It is a residential skyscraper in midtown Manhattan. The tower is as narrows as its width only allows one unit per floor.  JDS Development Group builds Steinway Tower. Located next to ‘Billionaire Row,’ it is an 86-story building.

One Vanderbilt is a relatively new addition to the skyline of NYC and claims the fourth spot in the list of tallest buildings in NYC. As the building opened in 2020, it has a delicate touch of both: functionality and modernity.

The summit, its observatory, will be opened in late 2022, where one can witness the vast panorama of tall buildings surrounding magnificent natural beauty. The building is big in length and width as it takes up an entire city block.

432 Park Avenue was built in just three years. Now a recreational and residential building was built on the site of a former 1920s hotel.

The building was designed by Uruguayan architect Rafael Viñoly where used the concept of the geometry of the square. Residential apartments are among the most expensive living places in the world.  This is an 84-stories high and very slim building that overshadows Central Park.

The Union Carbide Building, formerly the JP Morgan Chase World Headquarters, was completely demolished in 2021. 270 Park Avenue is currently under construction and shares the same address. The tower will stand 1,388 feet (423 meters) tall when it is finished, making it the sixth-tallest structure in New York City and double the height of the former headquarters. The first entirely electric structure with “net-zero operational emissions” will be located at 270 Park Avenue. A hydroelectric facility in New York State will supply all of the energy.

The building was completed in 1931 during the great depression. 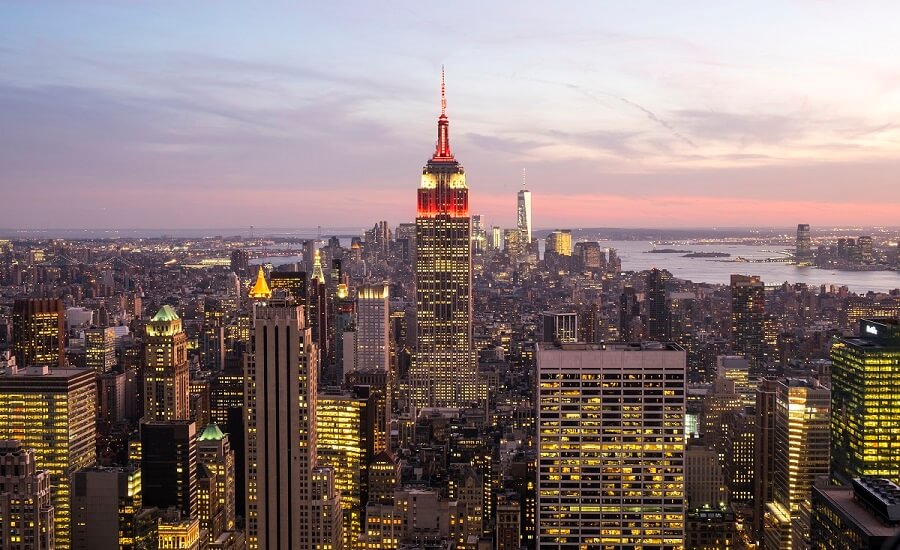 Bank of America Tower is a prime example of ecological architecture, another iconic name in the top 10 tallest skyscrapers in New York. It is a 58-story building and located between 42nd and 43rd Streets opposite Bryant Park.

It has a built-in system for capturing rainwater for reuse.   The building has attained a Platinum LEED Certification, which is the first skyscraper of its kind.

Three World Trade Center is part of the project initiated to reconstruct the destroyed World Trade Center. It is an eight-story skyscraper that began being constructed in 2010. The building is located at 175 Greenwich Street and opened in 2018.

It is designed by the architect Sir Richard Rogers.  The master blueprint for the building included pinnacles with a height of 356 meters but eventually dropped the idea, which reduced its height by almost 25 meters.

The extension of 340 Flatbush Avenue is another name for it. The structure has been topped up. It is situated in New York City’s Downtown Brooklyn area. The building’s development got underway in 2018. The Brooklyn Tower has 93 stories and reaches a height of 325 metres (1,066 feet). It will serve a variety of functions.

The primary architectural firm for the structure is SHoP Architects, and the building’s design is in the neo-Art Deco style. JDS Development is the project’s primary developer. The Brooklyn Tower’s foundation still contains the Dime Savings Bank building.

Last but not least, the building is called the MoMa Expansion Tower. It has this unique name because it is located adjacent to the Museum of Modern Art in New York. It was formerly known as Tower Verre.

Another iconic skyscraper named Chrysler Building is just a meter short of MoMa Expansion Tower, which saw why it could not make it to the top ten list. The building is designed by French architect Jean Nouvel. It has art galleries, luxury residential apartments, and a hotel.

The next building on this list is 53W53, a very tall skyscraper in Midtown Manhattan located at 53 West 53rd Street. The building has 77 levels and is 1050 feet tall. The base of 53W53, which is next to the Museum of Modern Art, has a gallery and a restaurant. A lounge is located on the 46th and 47th levels, and there are 145 residences and four floors of amenity space as well. The building project was finished in 2020. But the majority of the apartments are empty, like many other opulent buildings along Billionaire’s Row.

Another famous structure that dominates the skyline of New York City is the Chrysler Building. The Art Deco structure is situated in Midtown East at 405 Lexington Avenue near 42nd Street. When the Empire State Building was finished the next year, it displaced it as the highest structure in the world, which it held when it was finished in 1930. 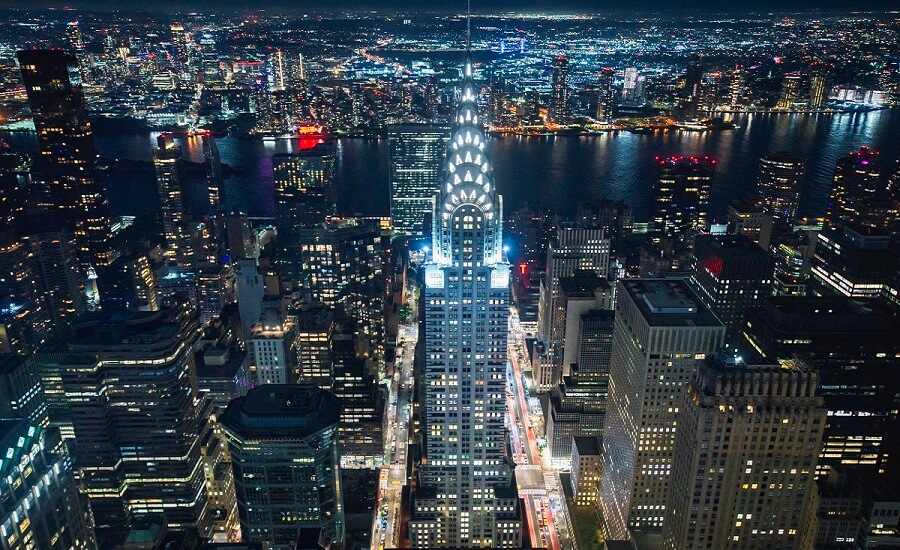 The Chrysler Building was one of the first skyscrapers built, the result of a collaboration between the former senator and real estate tycoon William H Reynolds and Chrysler Corporation CEO Walter Chrysler. The Chrysler building is 1,046 feet tall, making it the 65th highest skyscraper in the world and the 12th tallest in New York.

This 52-story glass and steel Midtown office tower, which serves as the home of The New York Times, is the eighth highest structure in New York City and shares that distinction with the Chrysler Building. It was created by “starchitect” Renzo Piano. In keeping with the news media’s commitment to transparency, it has garnered positive feedback for its sustainability features as well as for including a lot of glass and natural lighting.

However, some ground-level shops and eateries, such as Wolfgang’s Steakhouse and a Dean & DeLuca café, are open to the public even though the building is largely inaccessible. Additionally, keep an eye out for areas that are accessible to the general public, such as the lobby area with the “Moveable Type” artwork, a glass-enclosed outdoor garden, and TheTimesCenter cultural center and performance space.

What is the Tallest Building in New York City in 2022?

One World Trade Center is the tallest tower in New York. It is the seventh-tallest building in the world and the tallest skyscraper in the west. A 104-story structure that represents the year of the American Declaration of Independence.

What is the Tallest Building in New York Currently?

Is the Empire State Building the Tallest Building in New York?

With the spire and antenna added, the structure measures a towering 1,454 feet (443 meters). The building is currently the sixth tallest in the United States, the 43rd tallest tower in the world, and the fourth tallest in New York City.

The world’s tallest residential tower will be Central Park Tower, not merely in New York City. The 98-story supertall is the tallest apartment building in the western hemisphere, rising 1,550 feet to its highest point. The skyscraper is the tallest structure in the world outside of Asia, as measured by roof height.

What was the Tallest Building in New York in 1900?

What was the First Skyscraper in New York?

If you ask how many skyscrapers are in NYC? Well, there are more than 6000 high rise buildings in NYC. We have compiled a list of the ten tallest buildings, but plenty of other skyscrapers are there.

Unlike other cities, NYC expands vertically. High Size buildings are fast replacing mid size buildings. You may expect the addition of newer buildings in a list by the following year.